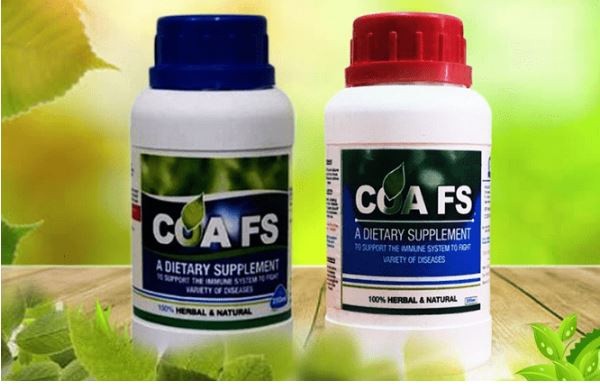 The Returned Bribe: Full story with a video documentary by Manasseh Azure Awuni

In April 2020, the Chief Executive Officer of COA FS, Samuel Ato Duncan, had an invitation to meet the Head of Legal Affairs at the Food and Drugs Authority (FDA), Mrs. Cynthia Dapaah-Ntow in Accra.

That meeting did not take place in the office of the FDA, where Mrs. Dapaah Ntow worked. The FDA’s lawyer led the producer of the popular food supplement to a restaurant near the Ghana Institute of Management and Public Administration, a location Samuel Ato Duncan does not know.

The meeting was not official, but the subject matter that necessitated it was official. Samuel Ato Duncan had suspected foul play in attempts by the regulator to suspend his product and had called the FDA’s lawyer to complain.

According to Samuel Ato Duncan, he had developed the product after researching a potential cure for HIV/AIDS. Some research and regulatory institutions had done some work on the product and concluded that it had some efficacy.

Researchers at the Kwazulu Natal University in South Africa conducted further studies on COA FS and said it had great potentials that needed further attention in the area of research and development.

Due to the difficulties in getting authorities to support him, he was advised to register COA FS as an immune booster.

In March 2020, the Director of Noguchi Memorial Centre for Medical Research, Professor Abraham Kwabena Anang, told journalists that COA FS as an immune booster could prove useful in managing Covid-19 until a cure was found.

“Director, is that true? This story is trending on myjoyonline.com and we need to be ready to provide robust, evidence-based answers.”

Another head of a regulatory state institution said, “So bad.”

The following day, March 26, officials of the FDA were at the COA FS manufacturing facility in the Central Region to pick samples for the testing.

At the Head Office of the FDA, the Head of Laboratories, Eric Karikari Boateng, took me through the process of how the COA FS tests were conducted with samples from the factory and the market.

According to Mr. Karikari, the first test which was conducted on samples collected from the market did not establish the presence of ecoli in the COA FS.

The FDA, based on the tests and visits to the factory, suspended the production license of COA FS and ordered the company to recall its products. The visit to the Cape Coast office of the company saw hundreds of cartons of the product.

The letter suspending the production of COA FS was dated March 31st, 2020. It among others stated that the reason for the suspension was that the product contained Ecoli. Ecoli, according to the FDA, causes diseases such as diarrhea, abdominal pain, nausea, and vomiting.

THE CEO of the FDA Mrs. Delese Mimi Darko said she would not comment on the COA FS matter when I contacted her.

These were the circumstances that made the producer of COA FS suspect foul play and had called the lawyer of the FDA to intervene.

The lawyer asked him to come to Accra with the necessary documents to meet her. After telling her why he felt the regulator was maliciously targeting his product, he said the FDA’s lawyer said she could help her but asked how much he would pay to the CEO of the FDA.

The two also agreed that Mr. Duncan would also pay 100,000 to Cynthia Dapaah-Ntow. What the two, did not agree or understand each other was the currency of the payment. While FDA’s lawyer thought her payment was also in US dollars, the COA FS CEO thought hers was in cedis.

“I said I would give her a cheque and she said she needed cash,” Mr. Duncan recalls the mode of the payment.

A photograph and a short video secretly taken showed Mrs. Cynthia Dapaah-Ntow taking the money into the boot of a VW Salon Car with a green number plate.

When I visited the Head Office of the FDA, the Head of Legal’s designated parking slot had a VW Saloon Car parked there.

He said after negotiating and taking the money, the head of legal at the FDA called him later in the day to come back for the money. In a phone recording between the two, the head of legal is heard saying among other things that the amount agreed was not what the COA FS CEO presented.

Here is an excerpt of the dialogue, which began with Mrs. Dapaa-Ntow accusing Samuel Ato Duncan of deliberately varying the amount agreed on:

You’re a business person and you did this deliberately. I’m very certain of that.

I’ve dealt with all sorts of clients so I know…

I am a lawyer and I’m an astute lawyer. I do serious practice.

No Prof.! You never said that. You said same. Prof., I’m a lawyer, I do cross [examination]… I meet my own clients. I meet them [laughs] so what you’re doing, it’s…

–Am I not your client?

Cynthia Dapaah-Ntow said even if the CEO of COA FS was giving the CEO of the FDA the cedi equivalent of 100,000 US dollars as agreed, the amount would have been more than 500,000 cedis.

Here is another excerpt of the dialogue:

When are you leaving Accra?

Awww Jesus Christ! No, so you can always come and pick it up, right?

We’ll call you. Uhuuh, I did this as a test. Prof. you see, you said you were bringing her 500 [500,000 cedis] and bring me the same, but you brought different amounts. So, I was testing your honesty.

Yes, Prof. That’s what we agreed.

Prof., I did that deliberately just to…remember I’m a lawyer.

And I said how can you give her that?

And we said okay bring her $100,000. And I asked you a specific question; [about mine] how much? Then you said the same amount

What does that mean? Because $100,000, if you were giving her that, would translate into 587 [587,000 cedis]. Is that not correct? Assuming you were giving her cedi equivalent, that’s 587 [587,000 cedis]. That is it. But me, I just wanted to test the person we are working with to see if you would be faithful because as I told you, I would help industries grow without anything, basically. Basically. And I cannot even be sure that you won’t, assuming I give it to her, you will not go and mention our names based on what has transpired.

Even though the FDA said state investigative bodies were investigating the case as of April 2020, when I went to interview officials of the FDA, my checks in October revealed that no such investigation was ongoing. A number of questions still remained unanswered:

Why did the head of legal negotiate and take the money in the first place when she knew it was a bribe?

Why did the CEO of the FDA not make any attempt to investigate and punish her head of legal affairs when it came to her attention that the head of legal had taken money in the name of the CEO?

In a letter dated August 7th, 2020, the FDA lifted the suspension on the manufacturing of COA FS after the company addressed what the FDA said were the “most critical deficiencies” identified by the regulator.

In another letter dated 1st September 2020, the FDA ordered COA FS to limit the indication of the product to “general wellbeing”. According to the FDA, the evidence does not support the claim that COA FS could support the immune system.

The FDA later asked the manufacturers of COA FS to change the name to COA Mixture, a prerequisite for the granting of a new production license.

On November 12, 2020, the radio version of the documentary was broadcast on Joy FM. The television version was to be aired that night, but Cynthia Dapaah-Ntow went to seek an injunction on the TV broadcast and also sued Manasseh Azure Awuni, The Multimedia Group, and Samuel Ato Duncan for defamation.

An Accra High Court, on June 4, 2021, gave Manasseh Azure Awuni and JoyNews the greenlight to show “The Returned Bribe” investigative documentary. The ruling by Justice William Boampong came seven months after the documentary was scheduled to be broadcast on JoyNews.

While Cynthia Dapaah-Ntow was fighting the publication of the documentary in court, some institutions had already taken note of it outside the country. The Thomas R. Kline School of Law at the Drexel University in Philadelphia, USA, denied her admission because of “The Returned Bribe” scandal.

Mrs. Dapaah-Ntow had applied to study the LLM in Healthcare & Pharm Compliance for the Spring Semester of 20-21, but the admission team sent her the following response in an email:

“Thank you for applying to Drexel University. After careful consideration of your application, the Admissions Committee has determined that we are unable to offer you admission.”

Unsatisfied with the response and curious to know the reason for the denial of admission, the FDA lawyer wrote to the university to find out.

“I am passionate about the programme and would want to reapply,” she said in her letter. “I hope you will be kind enough to point to me what worked against me in my last application so I do not repeat the same in my next attempt.”

In a response sent by the Assistant Dean of Enrolment Management, Audrey Woods, on December 17, 2020, the university explained that the denial of admission had nothing to do with her academic credentials.

“We found you to be a very qualified candidate, however, it came to the attention of the admissions committee that you were under investigation for allegations of bribery which is not in line with our values and code of conduct,” the university said in an email to the FDA lawyer.

A week after The Fourth Estate broke the story of the denial of admission by the US-based University, the Food and Drugs Authority (FDA) terminated the appointment of Mrs. Cynthia Dapaah-Ntow. The decision was taken after a disciplinary committee found her guilty of misconduct.

The FDA instituted internal disciplinary proceedings against Cynthia Dapaah-Ntow following an investigation by the Editor-in-Chief of The Fourth Estate, Manasseh Azure Awuni, that implicated her in a bribery scandal.

The disciplinary committee requested and was given the television version of Manasseh’s investigative documentary even though Mrs. Cynthia Dapaah-Ntow, had sought a court injunction against the broadcast.

An internal memo sent to the staff of the FDA said:

“Management would like to inform Staff that effective 18th May 2021, Mrs. Cynthia Dapaah-Ntow, Head of Legal, will cease to be a staff of the FDA. The decision was arrived at after Mrs. Cynthia Dapaah-Ntow was taken through the internal disciplinary process of the Authority, following a charge of misconduct leveled against her.

“The Disciplinary Committee recommended to the Board that the appointment of Mrs. Cynthia Dapaah-Ntow should be terminated. The Board has subsequently accepted the recommendation and given her the required notice of termination of appointment.”

After the airing of the radio documentary in November 2020, the Criminal Investigations Department of the Ghana Police Service began a “bribery and extortion” investigation into the matter.

The police have questioned the CEO of the FDA, Delese Mimi Darko, and Mrs. Cynthia Dapaah-Ntow on the issue. The police have also taken statements from Samuel Ato Duncan of COA FS and other relevant persons in the bribery allegation.

Ghana looks to other countries for more COVID-19 vaccines