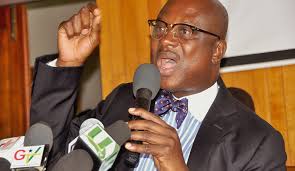 If you run Kumasi successfully as mayor, you can become President of Ghana – Kojo Bonsu

A Former Mayor of the Kumasi Metropolitan Assembly (KMA), Mr. Kojo Bonsu has said he has the skills and the required qualities to be President of Ghana.

He said his leadership skills, work ethic, and his experience put in him a position to be Head of State.

Barring any last-minute change in decision, he will be contesting for the torchbearer position of the National Democratic Congress (NDC) ahead of the 2024 general elections.

Speaking on Thursday, November 17, he expressed optimism about achieving the dream of becoming President of Ghana because he was successful as Mayor of Kumasi despite all the challenges that plagued the City.

He further intimated that all over the world, most Mayors turn to become Presidents of their respective countries.

“The management of the city can bring in power to the president, that if you run such a city, with all the problems and the challenges in Kumasi, you can become the President of this country,” he stressed.

“Worldwide” he added “most mayors come out to become president of their countries. So my experience, my style of work, my leadership skills push me to the position of becoming a president.”

Bring back toll collection and compensate us – Former toll workers