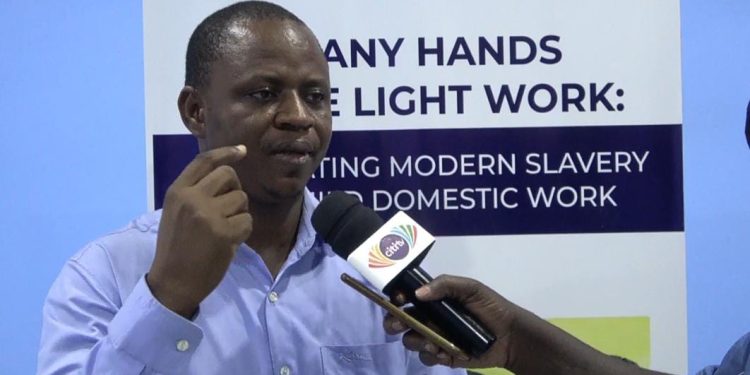 Challenging Heights, a Non-Governmental Organization in Ghana, is advocating for the elimination of modern slavery and slavery-like practices in child domestic work in the country. This was made known at a research dissemination workshop on Thursday, 10th March 2022, to share findings of a baseline survey on child domestic work conducted in August 2021.

The survey was conducted as part of a three-year project (2021-2023) being implemented by two Ghanaian Non-Governmental Organizations (Challenging Heights and LAWA Ghana Incorporated), and Anti-Slavery International-UK, with support from the Norwegian Agency for Development Cooperation (NORAD). The project titled “Many Hands Make Light Work: Eliminating Modern Slavery in Child Domestic Work” is aimed at ensuring that Children involved in domestic work are free from abuse, exploitation and slavery-like situations, and have their rights respected.

The overarching objective of the baseline survey was to provide a situational analysis of child domestic workers in Ghana using samples from three areas of Ghana- Senya (Awutu Senya West), Mumford and Dago (Gomoa West), all in the Central Region of Ghana. Specific objectives include exploring the demographics/background, working conditions, reasons for engagement, rights and responsibilities, types of abuses and available agencies and their capacity to seek agency when they are in abusive situations.

Speaking at the research dissemination workshop in Winneba, the Senior Manager for Impact and Strategic Relationships of Challenging Heights, Mr. Enock Dery Pufaa explained that Child Domestic Work “refers to situations where children perform domestic tasks, not in their own home but the home of a third party or ’employer’ sometimes under exploitative and abusive circumstances”.

Speaking to the stakeholders on the findings of the survey, Mr. Pufaa stated that a “total of 192 Child Domestic Workers and 81 employers were identified from the three communities. Significantly, over 70% of child domestic workers are females while all 81 employers are females, an indication that the phenomenon is gendered”.

Mr Pufaa further indicated that, following the completion of the baseline survey, Challenging Heights provided support to 55 Child Domestic Workers found to have been exposed to different forms of abuse and exploitation, including eleven (11) who suffered various forms of trauma. The eleven (11) Child Domestic Workers have been rescued and currently receiving rehabilitation and psycho-social support and therapy, while the remaining 44 are receiving home-based monitoring and support including school supplies and apprenticeship training.

Mr Pufaa called for a concerted effort from government, NGOs and duty bearers at all levels, to address the problem from the causal factors such as poverty, lack of job opportunities and income-generating activities for parents and employers, lack of access to educational opportunities, parental neglect and financial challenges. He further asked for sensitization to be more targeted and intensified at the community level covering children through Child Rights Clubs, Employers through the Employers Association and parents and the general community. Mr. Pufaa highlighted the need for the Stakeholders, particularly, the District Assemblies to support the development and review of bye-laws to place emphasis on Child Domestic Work situations in their respective districts and communities, while efforts are made to enact specific regulations on Child Domestic Work in Ghana.