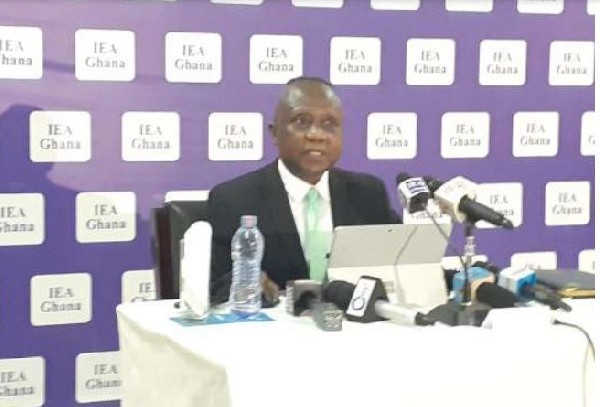 Dr. John Kwakye, the director of research at the Institute of Economic Affairs (IEA) has suggested to the government to split the 1.75% E-Levy between telcos and consumers.

His suggestion comes on the back of recent opposition to the controversial bill by the Minority in Parliament and a cross-section of Ghanaians.

“I think it is the E-Levy that has been holding up the budget,” Dr. Kwakye said.

“That is why I am proposing some kind of compromise, and I said why don’t you split it and charge the telcos 1% and then charge consumers 0.75%…,” he told Kwaku Nhyira-Addo.

“In other words, I am trying to maintain the level that government has proposed, so that we don’t miss any revenue as a result, …because you know during this COVID era, there are some companies or sectors of the economy that have been booming, they have taken advantage of the COVID.

“Telcos is one of them, and this is an emergency and in every emergency situation government has the discretion to impose taxes on the sectors that are seen to be booming, because that is where income is accruing to,” Dr Kwakye said.

Dr Kwakye is optimistic the Minority may buy into the proposal and accept the E-Levy eventually.

“There is a lot of complaints because consumers feel like the 1.75% is too much on them, and people are saying that it even amounts to multiple taxation. This is something that I am proposing as a matter of compromise.

“What I am saying is that why don’t you propose this for Parliament and then maybe the opposition may buy into it, because they will say maybe you are not over burdening consumers.. so this is just a proposal,” he said.

The dollar has arrested Bawumia – Mahama